I am posting another case. There has been a long interval in between as I was occupied with Clinical practice and other presentation.
So many times, we hear, Homoeopathy is an alternative system of medicine.
When *nothing works in* then so called *advanced medical science* the help of so called *Alternative medicines* are called into the picture.
Here is another case of one sided disease, where the patient was hospitalized and was on *death bed*.
One of the relative of the patient was a patient of mine. He anxiously inquired “Can homoeopathy be helpful in *any manner* in critical conditions like a state of *coma*?”
“What’s the case?”
“One of our distant relative was suffering from some complaints and he is admitted in hospital. There his condition has deteriorated very speedily and now he is critical. It would mean a real blessing if you can help them. But you will have to visit him in hospital as he is in nearly unconscious state”.
I visited the patient on 8 February, 1994. The patient was 47 years of age, married, having own transport business.
I went to see the patient at B.A.G. Hospital. The patient was a Sardarji, lying half way in bed with *Central Infusion* (intra-jugular), had a Ryle’s tube inserted through his nose, and a urethral Catheter.
I asked about the history, no one from the relatives present there, (the room was full of relatives, all huge people, having long beard, and pagdi) said anything in detail as they were sort of indifferent to the staff of the hospital (understandably as the patient, since the admission had instead of improving had gradually deteriorated) and they consider me as *one* of the staff member.
I asked for the person who had requested me to visit him. He came along with the wife of the patient.
She reported: “Sir ji, what shall I say? He was perfectly healthy. Yes, he did have a habit of drinking since number of years. But he was always *sober* never abused me or anyone during his drunkenness, he remained in *perfect control* even after consuming one bottle, so I never had any problem with his drinking. He had developed Gall Stones 5 years ago. Since July 1993 his drinking had increased. By end of December 1993 he used to complain of fullness of his abdomen even before having his meals. His appetite thus reduced. We gave him some medicine for increasing his appetite but that did not helped. So we consulted a physician, he said he immediately needs to be hospitalised. So he got him admitted in this hospital. Since then he is in the hospital.
He was admitted on 02/01/1994 and was discharged on 29/01/1994.
He was again admitted on 02/02/1994 as his condition had deteriorated.
As it is known, for homoeopathic treatment, we need to study the *person* in the patient. I had collected the past history about the *person*. Now I wanted the present complaints. So I went near the patient bed and asked few questions to patient like:
“How do you feel?”
“Do you have any pain?”
“Is there anything which hurts you?”
“How is your thirst?”
All were responded in Yes or No.
Regarding the nature of the *person*, I could not trace more mental symptoms except *He gets angry easily* from his wife and others present.
In technical terms of homoeopathy this is a classic case of *One sided disease*, a condition in which symptoms are obscured either from the beginning or from the treatment received. Such cases are difficult to perceive and hence more complex to treat furthermore to cure.
I studied the reports done so far. They were numerous. Though he was admitted in the hospital several tests were done at outside laboratory and CT scan centre.

The following report is of CT Scan:

There are some important observations noted. The impression is conclusive of a condition *Acute Pancreatitis changes along with significant amount of Right lumbar and ileac region collections. This was the status on 4 January, 94. 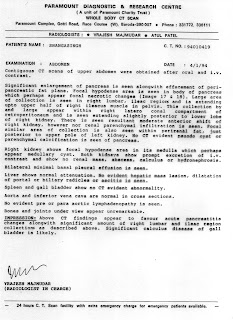 Another report of 15th January, 94, which was done at the hospital, is suggestive of: “Enlarged Liver, otherwise appear, Gall bladder of Normal size, with thick walls, and doubtful gall stones. Swollen pancreas, suggest changes of acute pancreatitis with ?focal Nodule. Fluid collection in retroperitoneam on right side. No definite ascitis.
CT scan is advised to confirm findings.

So, In spite of all the *best efforts* of the treating physicians now the disease of Pancreas had advanced. 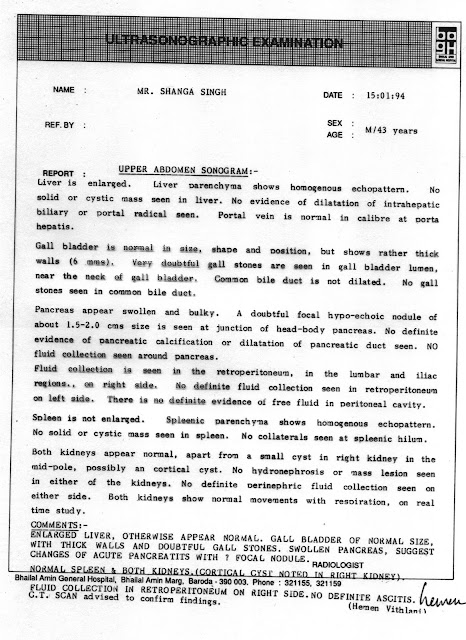 After waiting for 10 more days, on 25th January, 94, the CT scan was performed which is compared with the previous study done 21 days before. The conclusion is:
There is seen remarkable increase in right lumbar ileac, retrocoliec-posterior pararenal space collection showing CT density from +0 to +10 . there is also seen few air pockets in right ileac fossa region of collection.
Focal Necrotic changes now better appreciated in body pancreas region, which is still enlarged.
Loculated extrapancreatic area of collection are now better appreciated, anterio-lateral to pancreas on right side. This abnormality is seen in previous scans but now are better defined. Rest of the image morphology shows no significant change. 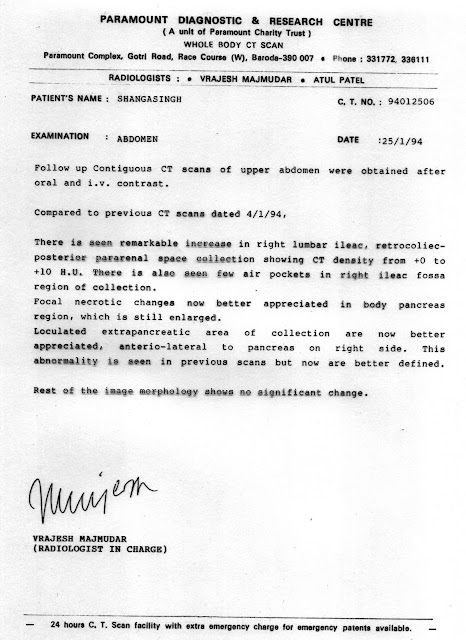 Putting these in *general* term means, that the disease condition of the organ (in this case pancreas ) and patient had deteriorated, with all the efforts and medication and treatment. By 20 days of intensive treatment the person should have recovered, if not fully, at least the affected organ should have improved.
The fact is otherwise. The patient had continuously deteriorated. His liver function was deteriorated, he had developed urinary tract infection, along with severely damaged pancreas. Previously inflamed condition now turned in to necrosis. (By definition the necrosis means: Death of cells or tissues through injury or disease, especially in a localized area of the body.) Now the patient was in a *critical* state. There was a group of specialists examining patient of daily basis.

The attending doctors were doing all sorts of tests and were having team meeting to review his case daily morning which would conclude invariably with the conclusion:

When one of the relative asked the treating team of physicians whether he can be shifted anywhere, the answer was:
“Yes…, you may shift him either to another Hospital or a Cemetery, but not to the home anyway.”

This was the condition of the patient. One can understand the condition of family members and the relatives. The head of the family was lying in the bed struggling with death. There were two kids at home, required care and consolation, oblivious from the worst possible. Every visitor to the patient had a different suggestion to make regarding the future course of the treatment.

The family and relative were not able to decide about future course. Someone suggested, “as of now he is not improving, what is wrong in trying Homoeoapthy? I have heard it works.”

This is common experience. When nothing works, try homoeopathy. This is since the development of homoeopathy. People were trying the prevailing modes of treatment for the relief of their malady. When nothing seemed to work, they turned to homoeopathy, and homoeopathy provided the much desired relief and cure.

The wife and the relative, who had suggested about homoeopathy, were not having very high expectations. All they wanted was *some* relief in patient’s condition. When the patient was admitted in the hospital he had walked in, and after several weeks of treatment now was confined to bed not able to move and even could not answer ‘how are you?’.

Considering the present state and the radiological, blood and urine reports, a homoeopathic medicine was selected and was advised to start in small drop doses.

The medicine was given for four days. On 12 February, the relative reported that the only change is that he is passing lots of urine now. Relatives were advised to continue the same medicine. On 14th February, the patient developed fever.

In view of the significant change in state, I visited the patient in hospital. To my surprise the patient was sitting up in the bed. The Central infusion and the Ryle’s tube, and the catheter were removed. He had started eating liquid diet. On my visit on next day, patient said, “Today, my physician made a visit. He was very happy and said I looked *pale* so he wants me to take Blood Transfusion for my anemia.”

I advised against it. He feared that they will not allow him to stay in the hospital. He resisted the idea of blood transfusion. The hospital physician was furious on the decision. So patient took discharge from the hospital (DAMA) on 19 February. Relative called that they were taking the patient back to home. I advised them to take the patient for the blood and radiological tests, in the ambulance and then go home.

Relative brought the reports next day: the blood reports were as follows

This blood report is suggestive that patient’ haemoglobin has improved without any blood transfusion. The intensity of infection is much less, compared to previous report (Normally ESR would reduce within 6 weeks, once recovery starts) The serum lipase level had become normal, suggesting his pancreas must have improved and there were no signs of urinary tract infection as the urine report came perfectly normal.
Let us study the radiological report now, which is as follows:

Within 10 days of treatment, such a wonderful recovery!
With the previous mode of treatment the patient suffered for several weeks and still the organ (pancreas) continued to suffer and there was no sign of recovery at any level.

With homoeopathic treatment, within days the consciousness of patient was restored along with improvement at every level.
So, the patient had developed courage to refuse his previously treating physicians, their suggested course. 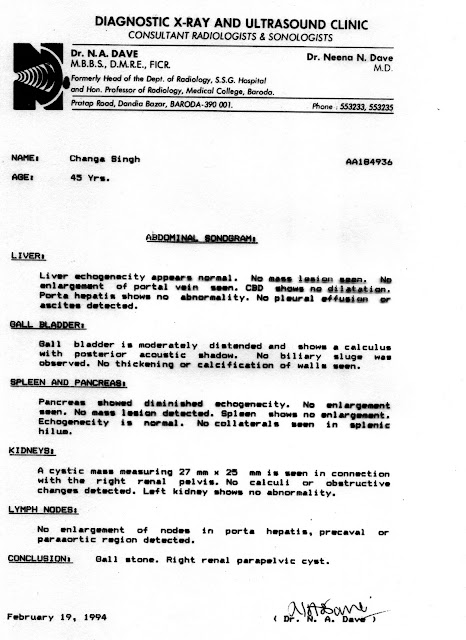 This patient was continued to be observed for more than one year. During which he did developed an episode of malarial fever, which was treated effectively with homoeopathy.
Just before the termination of the treatment patient developed urticarial eruptions. These eruptions subsided quickly with suitable medication.
The abdominal sonography was repeated after a year which came out normal, confirming long lasting recovery of the patient. His body weight increased from 59 kg to 72 kg. There remained no craving for alcohol. 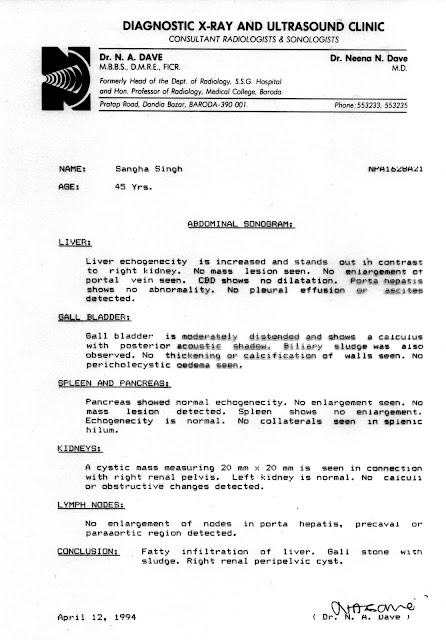 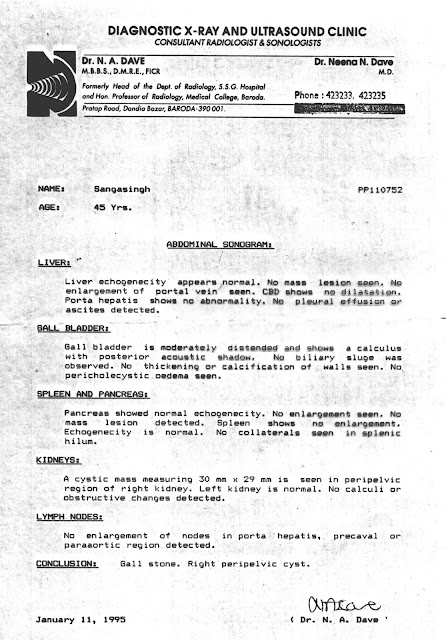 Contrary to popular perception, Homoeopathy is capable of delivering the prompt relief and recovery in all types of acute critical crisis. The real strength of this system is time and again verified by several physicians since its development.
In this case, on one side, i.e. the popular mode of treatment, tried out all possible medications along with repeated laboratory and radiological examinations, without being able to help the patient to recover. The strong medications failed to offer relief even after several weeks of intensive treatment.
On the other side, as is documented, the homoeopathic system of medicine, through its little gentle dosages, was able to not only provide relief, but the nearly impossible task, recovery of a necrosed organ within 10 days. The patient thus recovered and restored to perfect health.
Such is the strength of law of SIMILIA, on which the system is based.

The goal of homeopathy is rapid, gentle and permanent restoration of the health.

Iconic One Theme | Powered by Wordpress